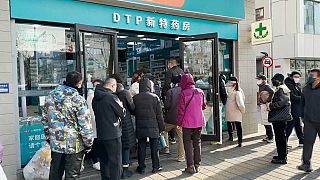 China has ended mandatory COVID-19 testing for many, in an attempt to loosen anti-virus rules and restart the declining economy. While official data showed a fall in new cases, the numbers did not include large parts of the population.

However just days after the official announcements, lines were seen in front of pharmacies to acquire self-test kits and medicines.

The government is looking to gradually emerge from the 'Zero-Covid' restrictions which saw millions across the country confined to their homes and it sparked protests calling for President Xi Jinping to resign.

Xi’s government began to loosen controls on November 11 after promising to reduce their cost and disruption.

Watch: Floods cause chaos in Lisbon

Watch: More than 145 migrants rescued at sea and arrive in Lampedusa

Watch: Lyon is lit up for the annual festival of lights

Christmas decorations light up cities around the world

Locals recover belongings after a volcano eruption in Indonesia