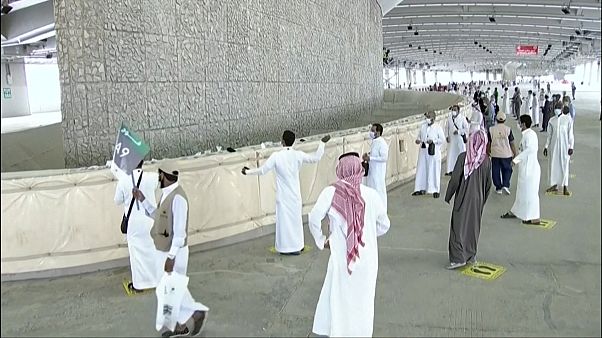 The masked pilgrims, dressed in white and separated in marked places to observe social distancing, threw seven stones each on a wall that symbolises Satan.

It comes on the final day of the Hajj pilgrimage on Sunday and is one of the final rites.

But Instead of collecting the pebbles as in previous years, the hajj authorities bagged and sterilised them to protect them against the new coronavirus.

Worshippers cast pebbles at three large columns, where Muslims believe the devil tried to talk the Prophet Ibrahim, or Abraham, out of submitting to God's will.

The last days of hajj coincide with the four-day Eid al-Adha, or "Feast of Sacrifice," in which Muslims slaughter livestock and distribute the meat to the poor.

The pandemic has pushed millions of people around the world closer to the brink of poverty, making it harder for many to fulfil the religious tradition of purchasing livestock.

Last year, some 2.5 million pilgrims took part in the pilgrimage, but this year as few as 1,000 already residing in Saudi Arabia were allowed to join.