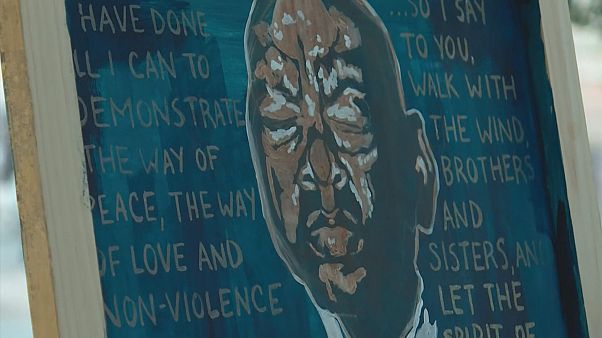 Artists have been using paint and other media to capture the Portland protests against racism and police violence, which have been ongoing for weeks and have at times turned violent.

The protests were sparked by the police killing of George Floyd in Minneapolis in May.

President Donald Trump sent more federal agents to the city in Oregon state to protect the federal courthouse in early July, but local officials said their presence made the situation worse.

Putting brush to canvas on August 1, one painter said he organised a so-called "Wall of Artists" to not only document the demonstrations but also to join in the action in a creative but peaceful manner.

"This is kind of a way to peacefully protest. I mean, this is a very passive, sensitive thing that I'm doing. I'm no threat," said Jonny, the organiser of "Wall of Artists".

But he admitted he had been caught in a cloud of teargas, despite the artists keeping to the sidelines of the protests.